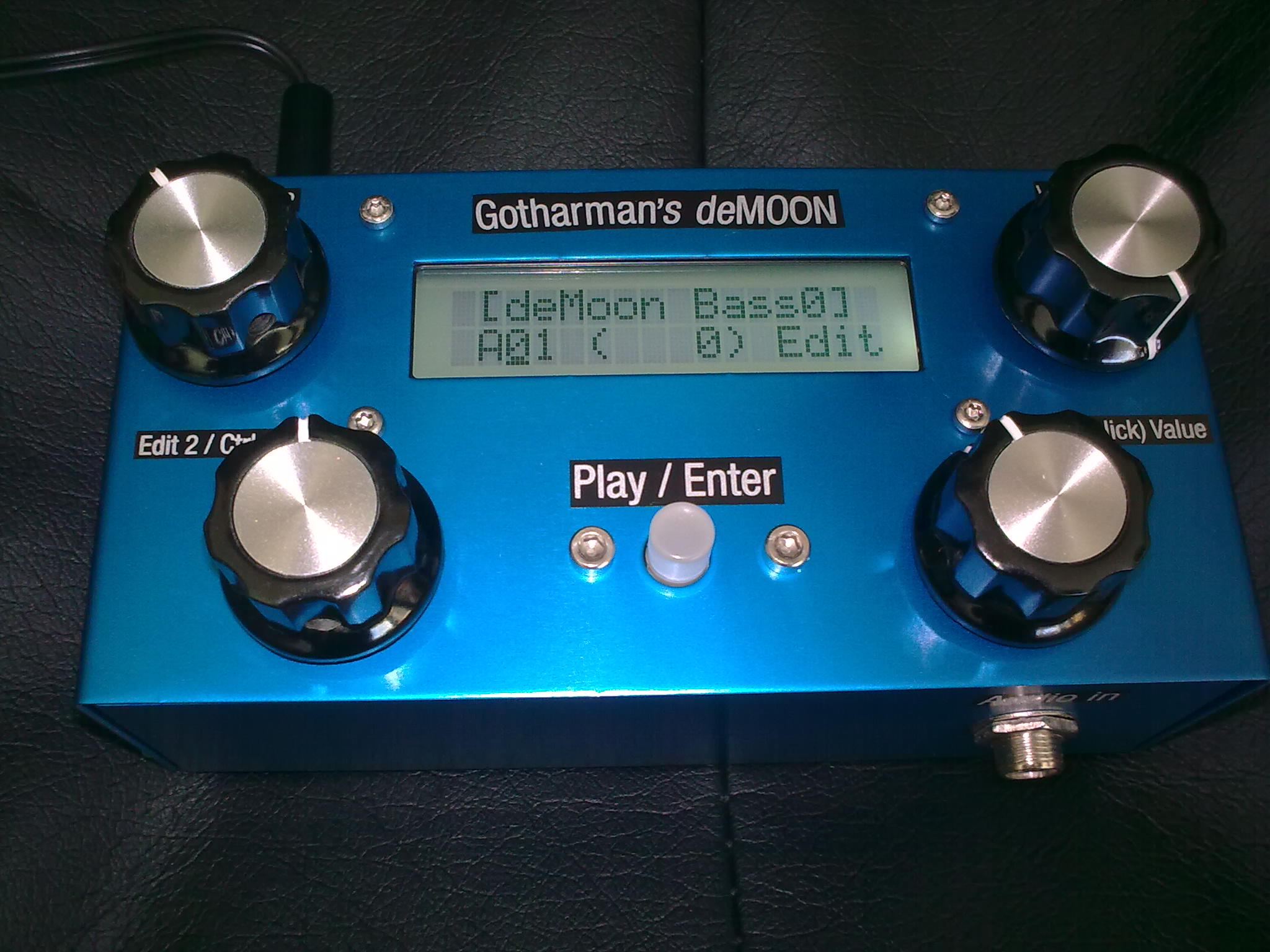 Affordable 4 note polyphonic filterbank synthesizer with build-in granulator and distortion effects, step-sequencer and note randomizer. Small and compact in size with a great sound. The headphone output and the step-sequencer makes it ideal to express your musical ideas everywhere, and store them in 128 memory locations.

The deMOON has four filters which are indepedently programable and each can be routed in serial or parallel to the others. Each filter can be set in lo-pass, band-pass, hi-pass, sharp band-pass or add mode. Cut-off, resonance and output levels can be modulated, and each filters output can be panned separately. The filter-section has it's own two LFO's (same types as descibed in the oscillator section), one envelope and one random-generator, that can be trigged from LFO1, LFO2 or midi note-on's.

The minigran are a scaled down version of our deFormer's granulator effect. It cuts the input up in small fragments, and reorder these fragments to create a totally different sounding output. While the deFormers granulator works in sizes of seconds, deMOON's minigran only works in sizes of milliseconds, so it is not very usable for rearranging beats. It's more like that it rearranges the waveform, and makes it sound glass/bell/voice-like or very strange.

deMOON has five different types of distortion to choose from:

-GAIN: Not really a distortion. Just gains the sound. It is possible to gain the sound so it clips.

-VALVE: A digital model of a classic valve distortion.

-FUZZ: A digital model of a classic fuzz distortion.

A one-track monophonic type with a maximum of 32 steps. Note, velocity and controller sub-tracks. Tracks are "recorded" by entering values for each step. Syncs to midi-clock.

The note randomizer treats incoming MIDI note on and off's and notes generated by the internal sequencer (if turned on). When it receives note data, it takes a look at a user adjustable probability parameter, and randomly decides if it will play that note or not. If it decides to play the note, it will have a look at a user adjustable random velocity parameter, and if this is higher than zero, it will randomize the note velocity value with the adjusted amount. This effect is very useful for creating variations in repeating patterns.

deMOON receives note on's and off's and program change on the selected midi-channel. The oscillators also receives pitch-bend data. All modulable parameters can be modulated by velocity and midi-controller 1-3. Midi controllers 4 to 90 are hard-assigned to most of the deMOON's parameters, for easy hooking up with a midi-control device.

deMOON's user interface are very simple: One volume knob, two edit/controller knobs, an encoder with click switch and a play/enter pushbutton with blue LED. In edit mode, the two edit/controller knobs edits two parameters at a time, on the selected edit page. In sound select mode, they transmits midi-controller 2 and 3 internally to the parameters, where these controllers are selected as modulation source. The encoder selects sound and navigate around in the edit pages plus it adjusts some switch-functions on some edit pages.