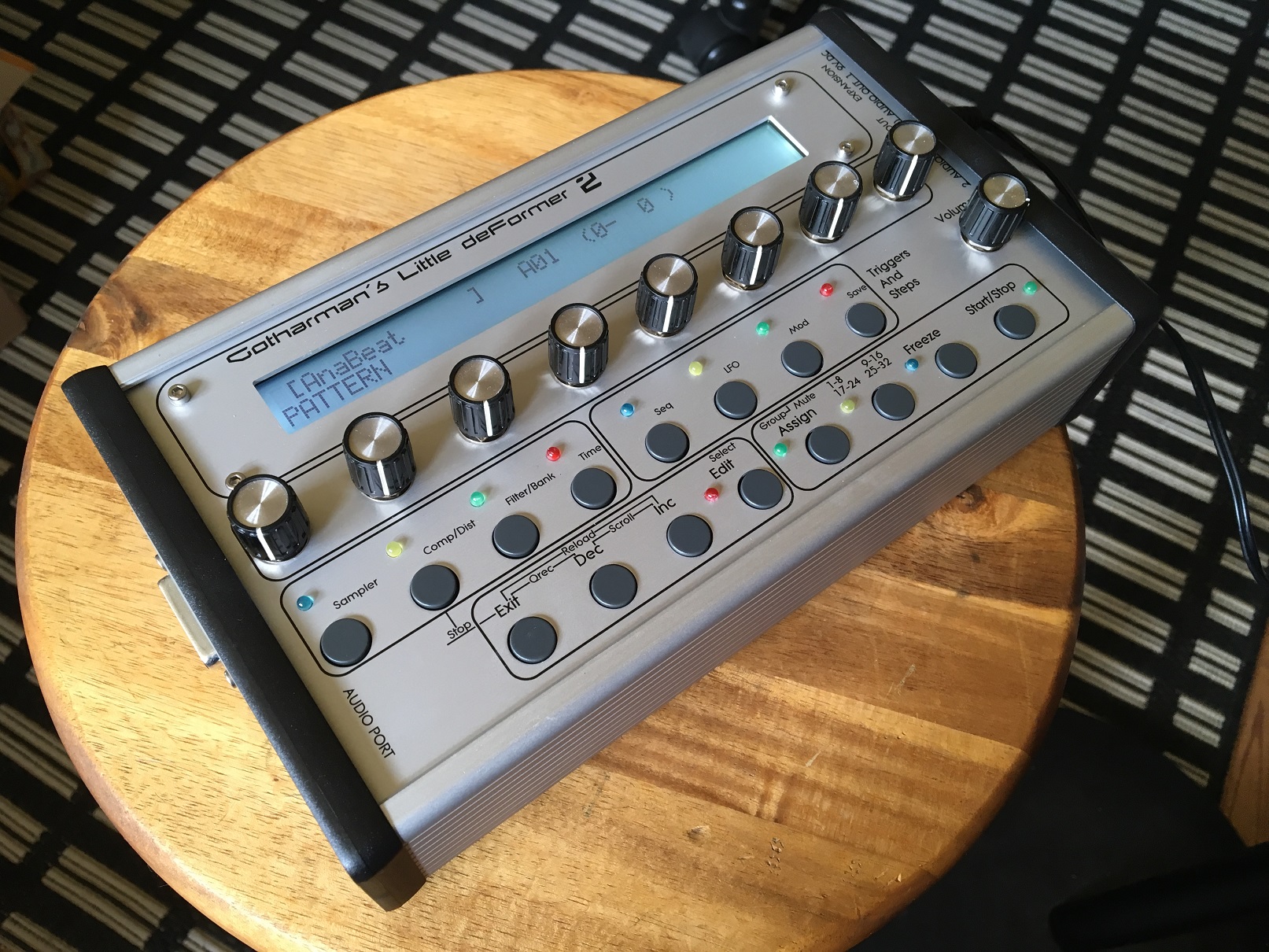 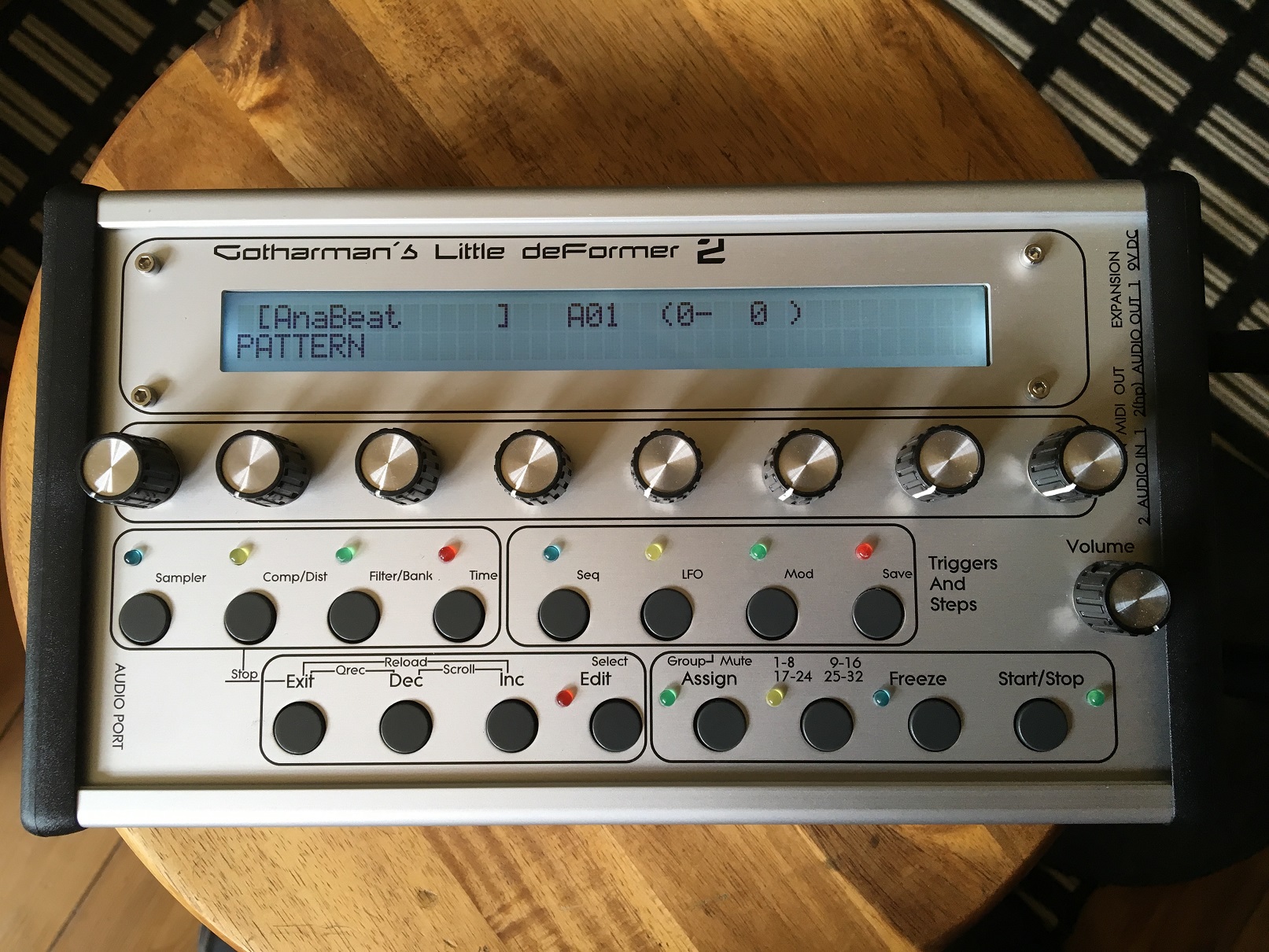 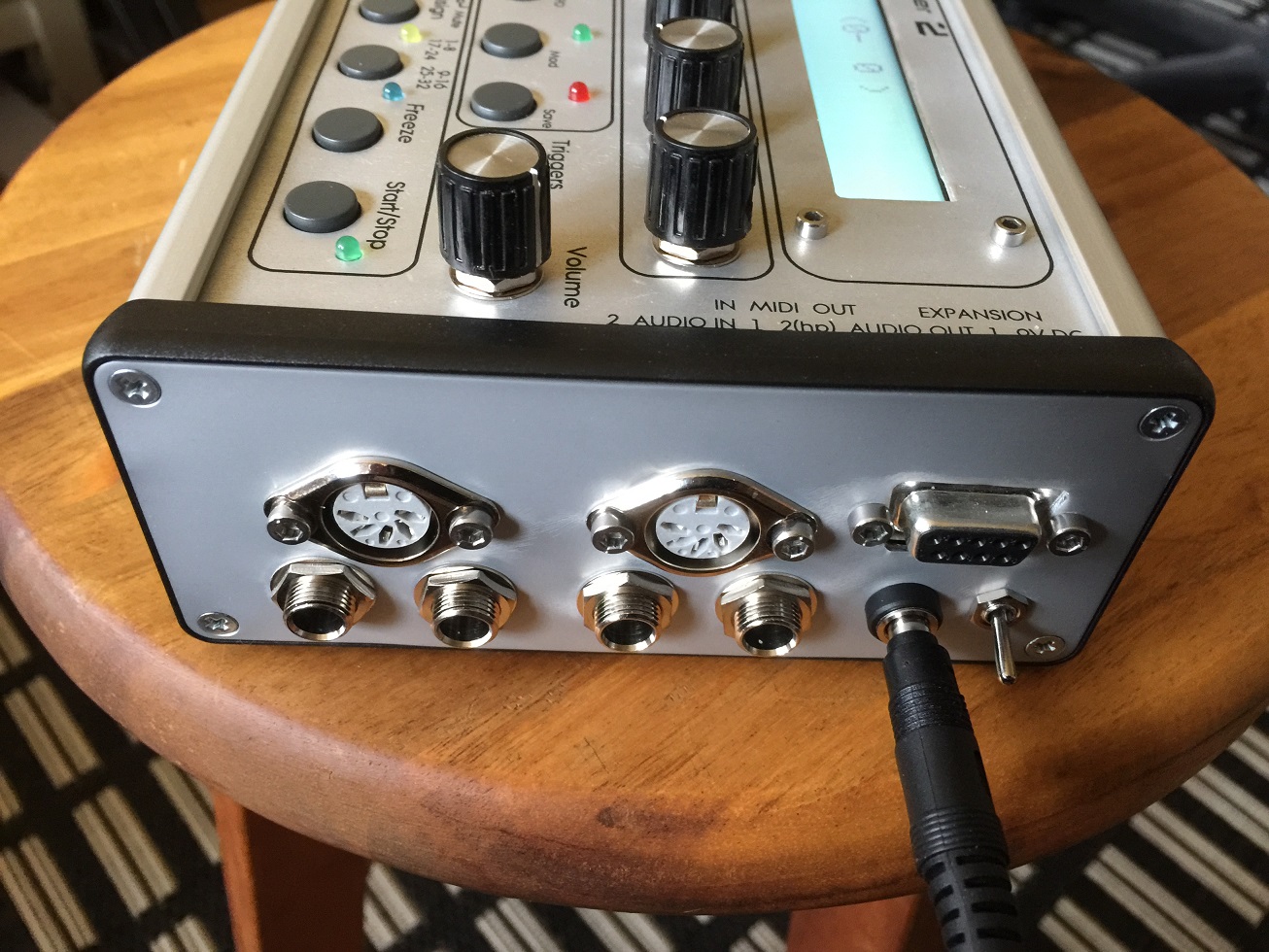 New on the Little deFormer 2:

-LD1 had a combined Effects Freeze and Sequencer start/stop button. On LD2 this has been splitted up to 2 separate buttons.

-It is possible to expand the memory of LD2, so it will get 200 minutes of sampling time, 1024 presets and 1024 songs. The extra sample memory is located in its own physical bank, and it is possible to copy samples between the two banks, and erase all samplings in one bank at a time.

-All shortcuts is written on the frontpanel.

-Compact, but yet it has a big display for easier navigation and editing.

Gotharman's Little deFormer combines a granular effects processor with special effects like TimeStretcher, Step-Granulator and PitchShaper and more usual effects like Reverb, delay, distortion, compressor, filters and bit manipulation, with some special parameters, with a 100/200 minutes sampler, a synth and a step sequencer. A MIDI Note Randomizer is also included.

Both the samplings and external gear, connected to it's 2 audio input can be effected. A complete list of effects can be found in the specs section below. Watch and hear Little deFormer in action, in the video's section. I have planned to use the Little deFormer as a platform for engineering new effects, so additional effects will be added now and then, which will be available as free downloads on this site. These updates will be available as MIDI sysex files in".syx" format, and you will need a program like Midi-Ox to download these to Little deFormer.

The 4-note polyphonic sampler makes it possible to record your own samplings directly from the 2 audio inputs, or re-sample it's audio output. Samplings are stored in FLASH RAM for instant recall, without any loading times. Up to 200 minutes/999 samplings can be kept. Start and end points can be changed in realtime and modulated, and it also has functions like AutoChop, for a conveniant and easy way to cut up long samplings. Each sampling has it's own Phaze effect and filter with LPF, LFP2, BPF, BPF8, HPF, ADD, BEF, BASS, LO-FI and SHAPER modes, and a filter mix parameter. It is also possible to adjust the filter response, to create filter types, that have never been heard before. The Little deFormer comes loaded with samplings of other Gotharman gear. Instead of samplings, it is also possible to use Little deFormers build-in oscillators for sound generation. They can morph from sinewave to triangle to sawtooth to squarewave to noise. Pulsewidth modulation is possible on all waveforms.

The Little deFormer comes with an expansion port, for connecting any of the available expansion boxes. Notice, that only one expansion box can be connected at a time.

-Will come loaded with samplings of other Gotharman machines - See list below!

-Maximum possible sample time for one sampling is 100 minutes.

-When samplings are recorded, they can be selected just like waveforms on a synth - NO loading times!

-Build-in Oscillators can be selected per step button instead of a sampling. These can morph from sine to triangle to saw to square to noise, and all waves can be pulsewidth modulated. *NEW

-Each sampling has its own filter - All of the filter types from deMOON plus some new odd ones, with added filter shape adjustment and positive/negative mix

-Each sampling/Oscillator has an envelope that can modulate pitch, filter cutoff, filtermix and sample output level.

-Non-destructive Auto-Chop - After auto-chop is performed, it is possible to adjust, add or delete chop-points

-Quick Record mode lets you instantly record a sampling, whenever you want, just by pressing the "Exit" and "Freeze" buttons at the same time.

-Both sample/oscillator voices and external audio sources connected the audio inputs can be processed through the effects.

-Sample/oscillator voices and audio inputs can be assigned to one of four effect busses. Each effect are assigned to a bus.

-Audio can be saved together with an effect preset, for easy recall of THAT perfect moment!

-Gotharman's Variator effect. A granular effect that will create variations of the audio input.

-Delays with some new odd parameters like "delay box depth" and "beam" and "Freeze". When a delay is frozen, it's audio contents can be saved as a sampling.

-Reverb - Not a clean convolution one, but a FAT synthesized reverb with many sound possibilities

-Glitch Shifter - It is definately not a pitchshifter, so it MUST be a.....

-Gotharman's PitchShaper - From my eurorack module with the same name, with some new added parameters, plus a new one-input variation.

-Filterbank with some newly engineered filter types, filter shape adjustment and both positive and negative mix

-4 controller tracks - Assignable to most parameters

-Able to control both the internal samplings, synthesizers and effects as well as external MIDI gear

-Control tracks can be linked directly to note step tracks, for melodic playback

-Each track, both note and controller, can have separate length settings *NEW

-2 presets (patterns) can be linked together, with adjustment of how many times each preset should play *NEW

-Syncs to MIDI clock, or any other clock source through the AnaX Analog Expander

-Each channel has: Note-on probability, velocity and time parameters.

-10 LFO's with morphing between waveforms: Triangle, saw, square, pulse, unlinear high-frequency waves and random. LFO's rate, wave and mod amount can be modulated. The LFO's can also be key-synced, and they can loop or only run one time. *NEW

-16 voice trigged random modulators - One for each sampling/oscillator. *NEW

-Modulation matrix with 32 sources and destinations at a time. Allmost all parameters can be a destination.

-512 - All user re-writable. Stored in FLASH RAM, so like all other Gotharman products, no battery back-up is needed.

-When an effect preset is saved, and "Freeze" is on, audio is saved together with the preset.

-OS can be updated via MIDI. I have planned to use the Little deFormer as my platform for engineering new effects. These will be available as updates.

-Receive and transmits note on/off messages for triggering of samplings and grains.

-Most parameters can be assigned to MIDI CC's and velocity. *NEW

-MIDI: In and out

Comes loaded with samplings from:

Find a complete list of samplings in the Quick Manual